Over the past several years, I have grown quite accustomed to using a standing desk at home (I have an adjustable Ergotron that I absolutely love). I decided it was about time to make the switch at work, however, I didn’t want to spend a lot of money on a desk. Thankfully, I had come across a blog post by Colin Nederkoorn on a standing desk he and a coworker built for $22. I like the design, however, I wanted more room for monitors. One of the comments on the blog led me to Jinyoung Kim’s modification of the Ikea desk which used a wider table than Colin’s design. I ultimately based my desk plans off Jinyoung’s design, since it allowed for multiple monitors, laptops and other gadgets.

The main components of the desk are as follows (they should cost about $45 total): 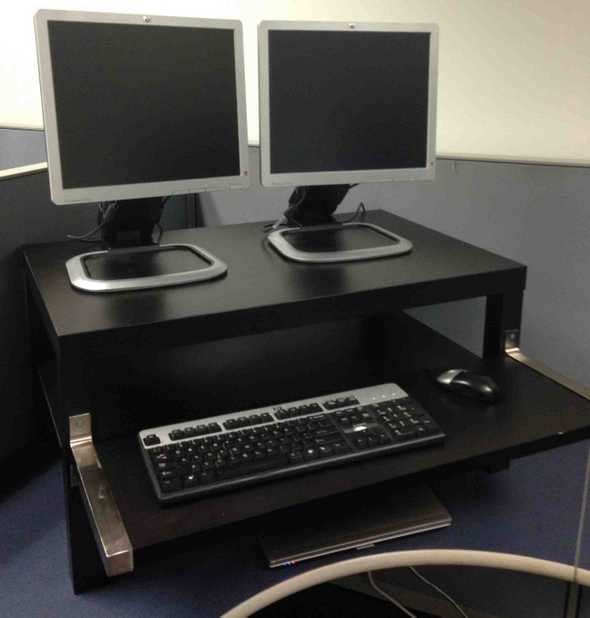 As noted on Jinyoung’s site, the shelf needs to be sawed down a bit to fit the dimensions of the coffee table. I like the brackets I used since it hides the rougher side of the shelf that was cut down. I would also echo his sentiment about using bolts to hold up the shelf as they are sturdier than screws. Finally, as someone who has used standing desks for a couple years now I would HIGHLY recommend having a gel kitchen mat to stand on; especially if you’re over hardwood or concrete flooring.