A feature based approach to React development

There are a lot of opinions around how to arrange a React project. In this post, I want to talk about feature folders and why I think they are a great choice for React application structure.

Focus on the goal rather than the technology

In many languages and frameworks, the prevailing wisdom is to group like technologies together. For example, when starting a new Rails or .NET MVC project, we generally have a series of folders for Models, Views, Controllers, (sometimes services and other things as well). While we don’t often have these types of items in React — it is fairly common to see a Components directory, some sort of Utils directory, and if we’re using Redux, a folder for Reducers, Actions, Selectors, and so on. This works great when a project is smaller but over time, this can be unwieldy — especially when working with teams of people.

Feature folders help eliminate some of these problems by placing everything that is unique to one area of the code together. For instance, if we were making a login feature, we would have a folder for Login and in this folder we would have our login components, actionCreators, reducers, selectors, etc.

This arranges our code by what the code’s mission is and how it contributes to the overall goal of the project rather than the technology.

This is not much of a mental leap for React developers

In React, we are used to structuring our application as a series of components. Where traditional applications are built with a number of HTML files, CSS files, and JavaScript files, a component can encapsulate all of these things. 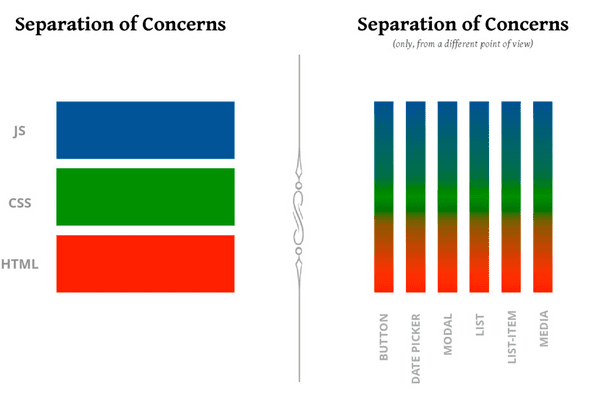 from Cristiano Rastelli’s “Let There Be Peace on CSS” talk

What’s interesting about this vision of separation of concerns is that it also reminiscent of the “Vertical Slices” terminology that is commonly used in some agile development circles (and also used as an argument for using feature folders). Instead of thinking of a system as a series of Actions, Reducers, Selectors, Components, an application can be imagined as a series of features. Features, at this point, can almost be seen as “components” of application structure. 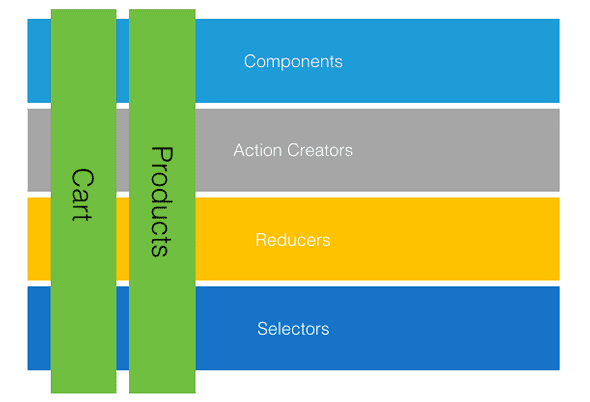 What about shared code?

Shared code can (and should) still exist in a feature based paradigm. There are some things that benefit many features and those could live in a “shared” directory.

To illustrate how we could migrate an application to this strategy, lets compare the Redux Shopping Cart to a more feature-oriented example I’ve created.

To migrate to a more feature-oriented method of structuring our code (there are some files like tests and other things like that I leave out of this guide):


Once these steps are complete — we can update any references to point to their new locations. One thing of important note: it’s generally a good idea to reference any part of a feature through the feature’s index rather than the file directly. This treats the index as each feature’s API contract and quickly illuminates any issues that may occur with any refactoring.

View the example on GitHub

Benefits of this model

Code is structured in a way that reflects purpose

This makes it easier to find files and know where things belong. Additionally, it helps clarify how a bit of code contributes to the overall goals of an application.

Code is easier to refactor

If a feature has one entry point, it’s clear that removing the feature will have limited impact on the rest of the system. Additionally, if changes are made to a login feature, they should have no impact on a “cart” feature.

(feature is kind of an overloaded term here)

“Feature Flag is a technique to turn some functionality of your application off, via configuration, without deploying new code.”. While not entirely related, organizing an application as a series of features can make feature flags easier to implement.

If we have a feature, buyNow structured as follows

And our index for our buyNow feature looks like this

When the buyNow feature is set to false in the featureFlag file, the component will not render.